For the last illustration for the exhibition during the Museums at Night 2016 event I chose the Giant Atlas Moth in the various stages of development. At first I wanted to paint an orchid which I have in my room but I started to read about the Giant Atlas Moth and I found out that it lives in the Malay Archipelago. I was surprised because it evoked my memories from my two trips to Malaysia, Singapore and Indonesia. Then I read that this species feed on a variety of plants including Rambutan Tree. I realized that when I was in Malaysia I took many photos of the leaves of this tree as well as the fruits. I thought it would be a great idea to show the Moth with the Rambutan.

Here’s my sketch. I placed the eggs on the leaves. Newly hatched caterpillar is at the same twig where the eggs are. Older caterpillar is crawling on the twig. I also sketched one more leaf below and placed the pupa there. The adult moth is in the bottom left corner. The whole painting will be in contrasting colors: reds, browns and greens.

Do you know why they are called rambutans? The word “rambut” in Indonesian and Malaysian languages means… hair. Here is one of the photos I took in Kuala Lumpur:

I started with one opened rambutan. At the beginning I painted each section at a time as I normally do but I realized that it would take me ages to finish it and I kept in mind my deadline.

I decided to paint the whole fruit in a different way. I applied yellow ends on the hairs. Rambutans start out green, then turn red, orange, or yellow as they ripen. The hair-like “spines” are green when the rambutan is fresh picked, but later they turn yellow and then black.

I applied red on the skin. I used Winsor Red PR254 which I found the most suitable here. It’s a very strong red. ​

For the shadows of this red I used a mix of the same red with Winsor Green (Blue Shade) PG7 or in some parts Winsor Red Deep PR264.

I painted the second rambutan exactly the same way. I started with applying the colors on the ends of the spines. Here I used more green.

Then I was gradually adding reds on the skin.

This painting so far has taken me about 15 hours including the sketch. ​

The next step was the fascinating caterpillar of the Attacus atlas in the fourth stage of development. I have seen lots of photos and videos showing the life cycle of this moth and I must honestly admit that they are amazing. One of my favorite videos is the one made by Mr. Adam Grochowalski.

The caterpillar is covered with a white powder. First I painted the whole body, then I added whites with white tempera.

I placed the eggs on the leaves and covered them with masking fluid. This way I was able to paint the leaves freely, not afraid of the oval shapes of the eggs. The masking fluid laid on the paper for three days. I took it off the eggs and painted them with a mix of Winsor Red Deep + Permanent Rose + some browns mostly for the main light parts and for the darker spots in the middle I used Perylene Maroon with Quinacridone Magenta and some brown + some Transparent Orange and very dark mix of French Ultramarine + Burnt Sienna + a bit of Quinacridone Purple in the centre.

My three favorite basic greens are Winsor Green Blue Shade PG7 and Yellow Shade PG36 and Permanent Sap Green PG36 / PY110. I use them as a starting point for mixing other greens. Sometimes I add French Ultramarine PB29 to darken the color. I also love Quinacridone Gold PO49, because it is very versatile and creates beautiful greens with blues.

Here is a little tip. I don’t have a brush holder and usually I lay my brush on a tissue but I noticed that the bristles sometimes deform. I took a little cardboard box in which I kept my business cards and cut out triange shapes on both sides. Now my brushes are laying still and the bristles are straight. ​

I also removed the masking fluid from the eggs and painted them using a mixture of Winsor Red Deep PR264 + Permanent Rose PV19 + some browns for the lightest parts, and for dark spots in the middle I used Perylene Maroon PR179 with Quinacridone Magenta PR122 and browns + a bit of Translucent Orange PO71 and dark mixture of French Ultramarine PB29 + Burnt Sienna PR101 + a touch of Quinacridone Purple PV55 in the middle.

There is also this little guy at the bottom. I painted this leaf because I wanted to add the chrysalis of the Atlas moth somewhere and this idea seemed to be a good one. 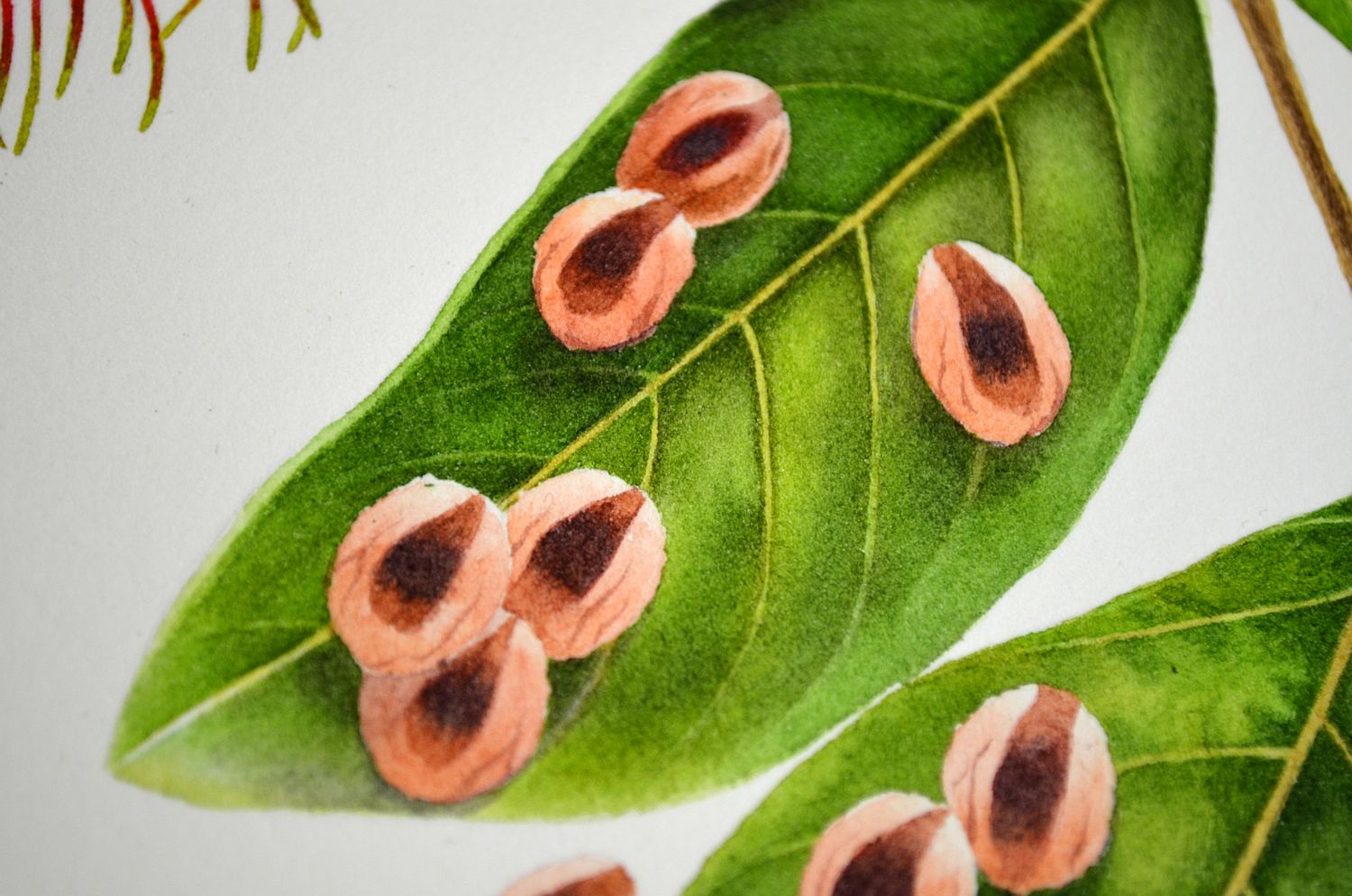 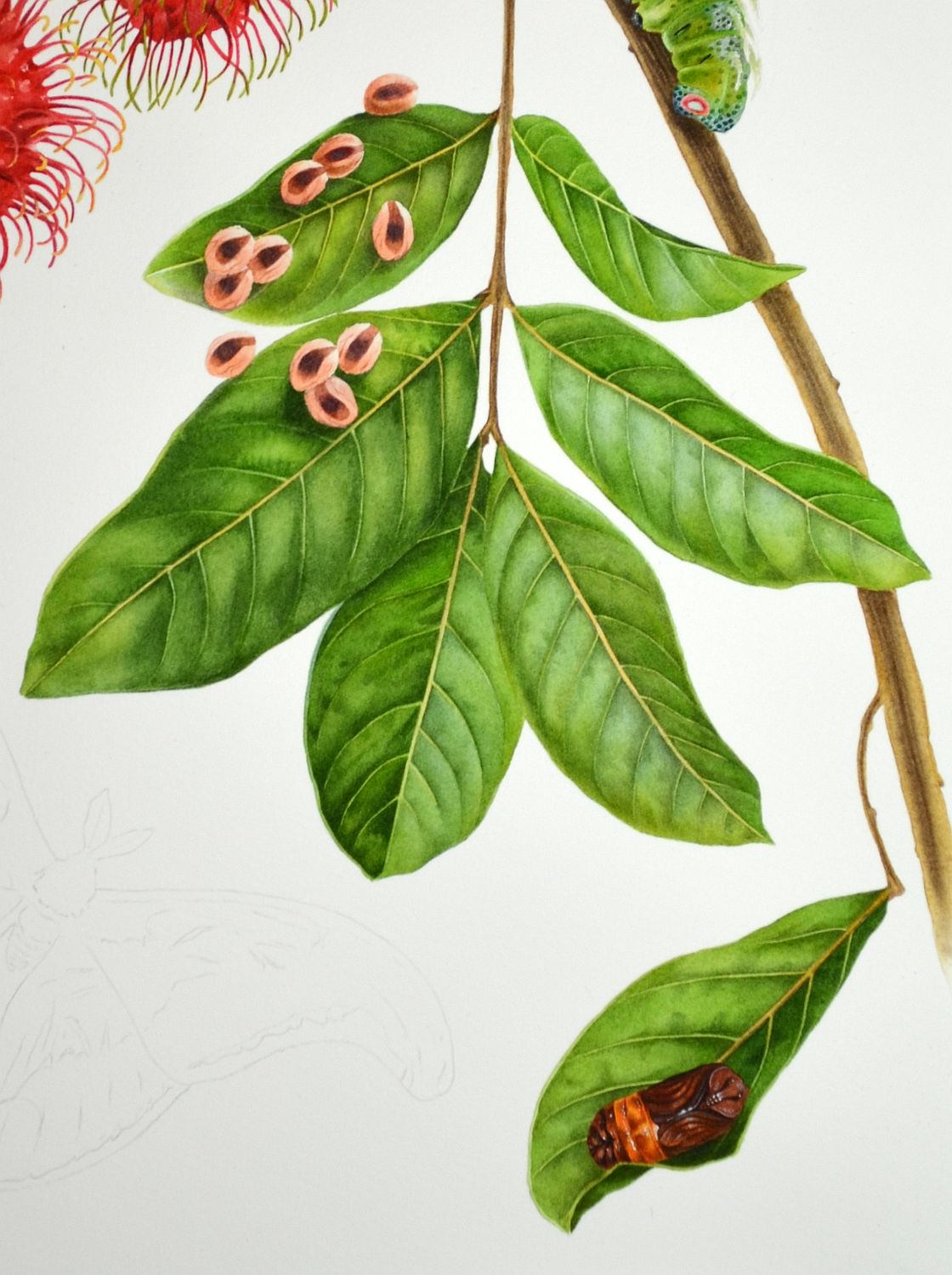 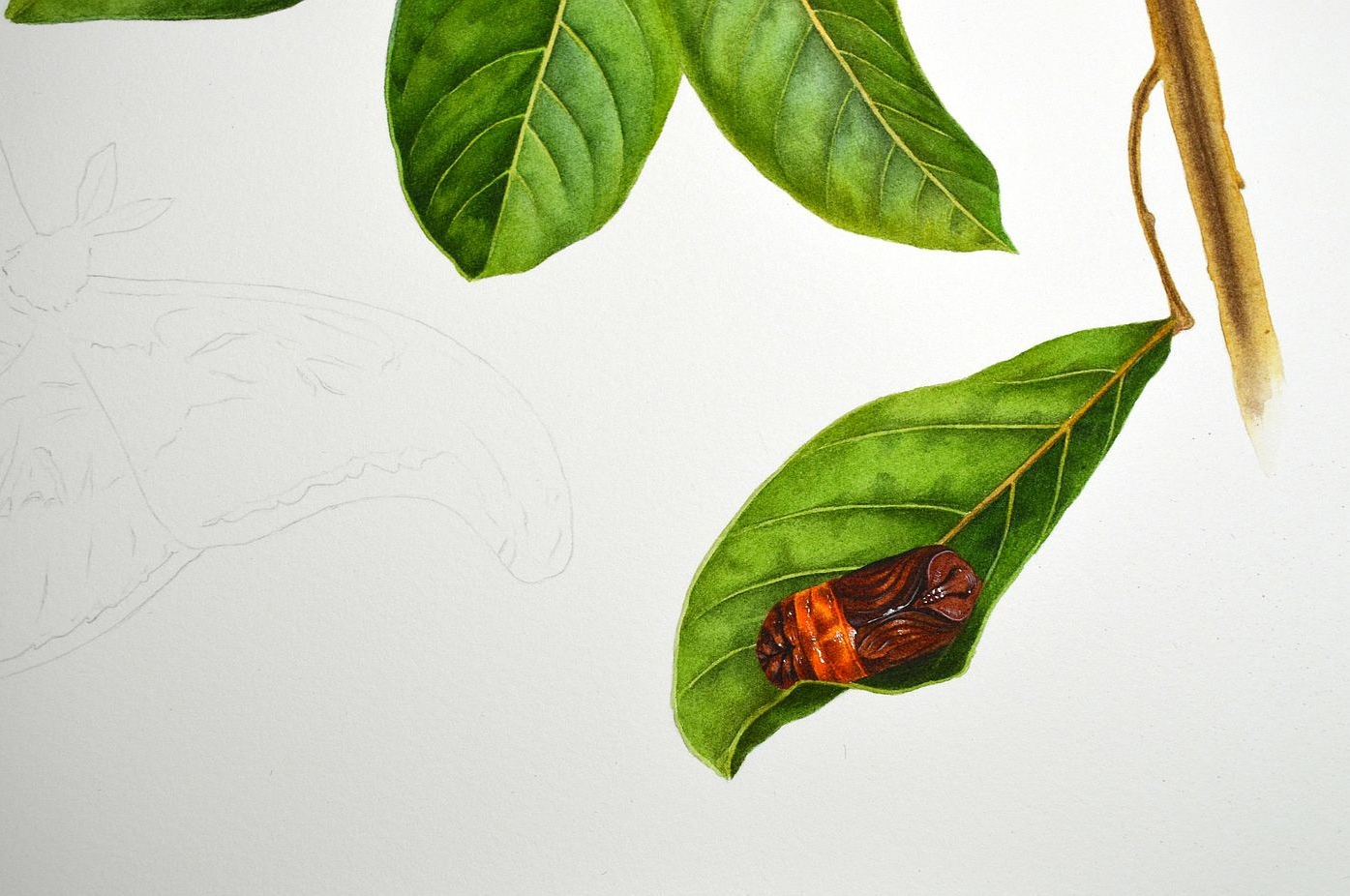 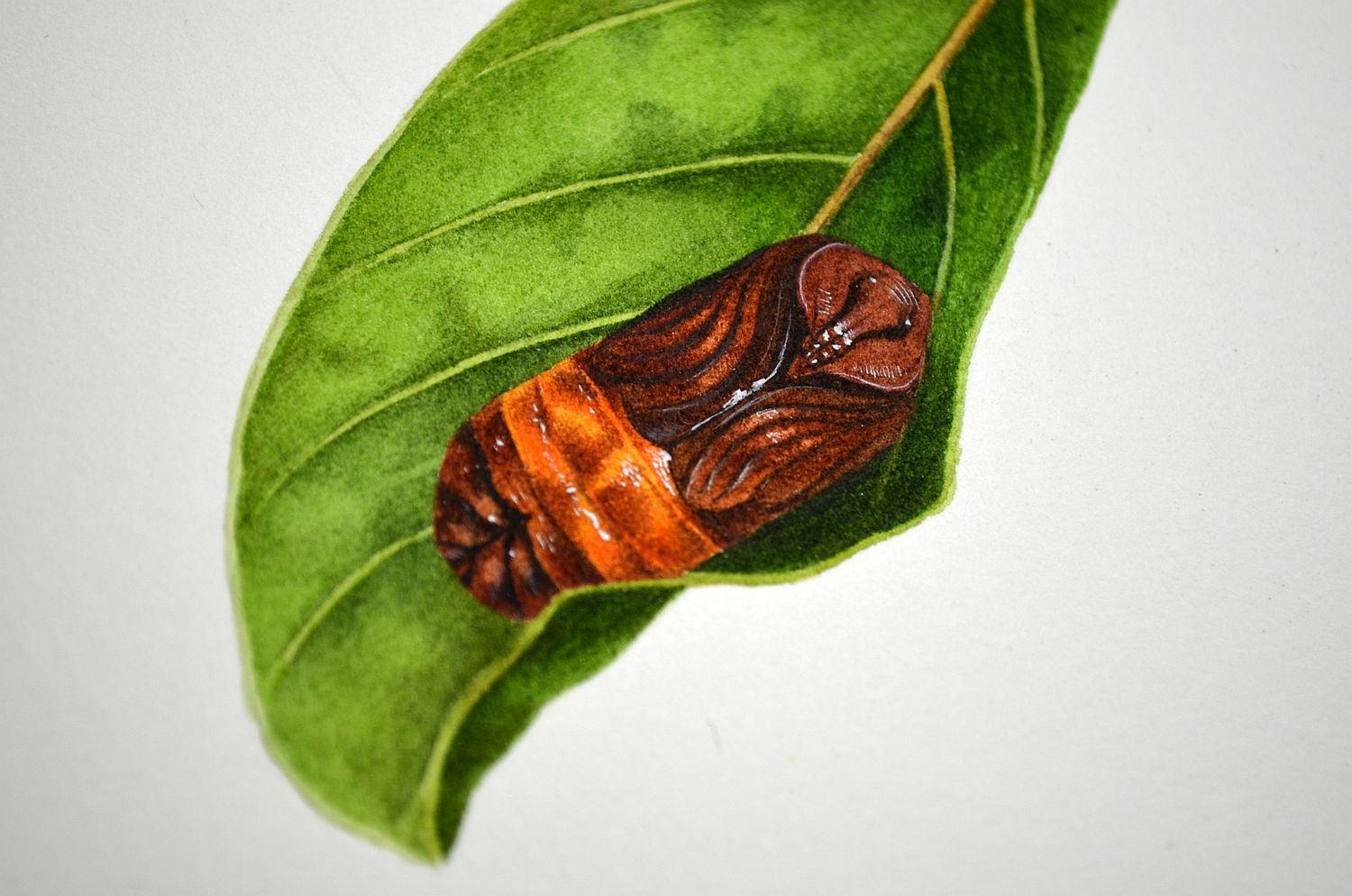 Attacus Atlas is the largest moth in the world. I could not wait to paint it, because it is simply extraordinary. The ornaments on the wings are like a huge puzzle.

I found a lot of very interesting information about this moth. Let me write about some of them:

1. This is the largest moth in the world in terms of wings surface. The can reach 400 cm² with a span of 25-30 cm
2. The word “atlas” contains many meanings referring to patterned wings, giant wings (reference to Atlas – the Titan holding up the sky for eternity) and to the tips of the wings which look like a snake’s head. The latter results from the observation of Chinese people who call this moth “a moth with a snake’s head”.
3. After leaving the chrysalis, the moth lives very shortly (a few days, a maximum of two weeks). They do not have mouths, so they can not eat. The only food is stored during the larval stage of their lives.

I liked the Chinese observations very much. I have not noticed it before, but the tips of the upper wings really look like the snakes’ heads.

Here are a few close-ups. To paint the moth I used a lot of Perylene Maroon PR179 and all four browns from my palette: Gold Ochre PY42, Burnt Sienna 101, Raw Umber PBr7, Burnt Umber PBr7. I made small spots with white tempera.

Five of my illustrations will now go to Gdansk. They will be exhibited during the Museums at Night 2016 event at the Library of Polish Academy of Science.

Lovely study of the rambutan fruit.

Thank you very much Annie! :)