The last stage of painting this illustration are insects. I decided to put Melitaea didyma butterfly in the three stages of development. They are: chrysalis, caterpillar and adult insect. There will be two adult butterflies, because one of them has spread its wings and I will present him on top, and the other will have folded wings and I fill paint him from the side.

I started painting from applying the Translucent Orange PO71 layer, I avoided patterns which later would be black. I first applied Burnt Umber PBr7 with Burnt Sienna PR101 on the patterns. When everything has dried, I began to paint black patterns. Here I used the mix that I recently discovered. This is a combination of Perylene Green PBk31 + Pyrrol Crimson PR264, which gives the perfect black. 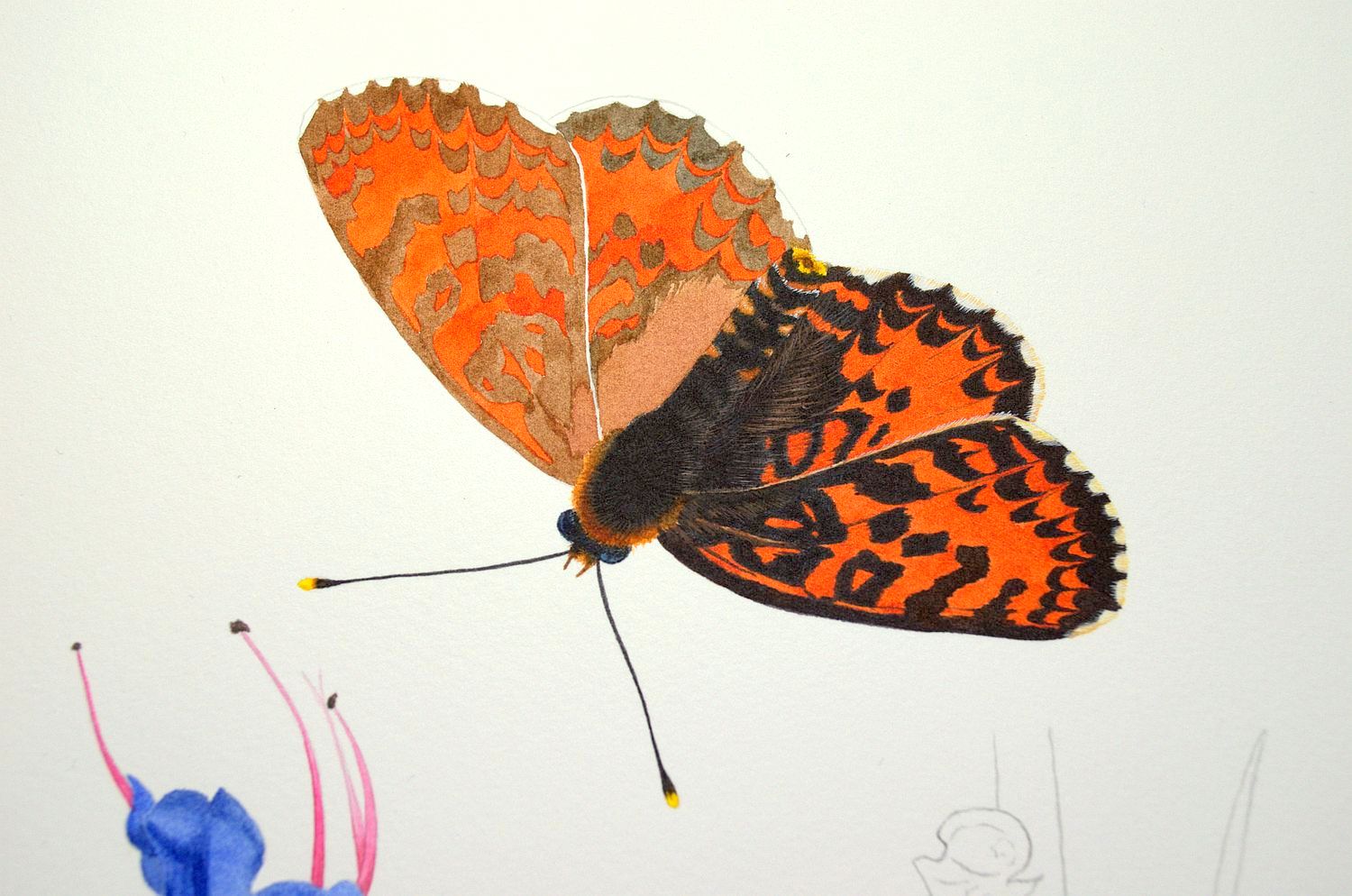 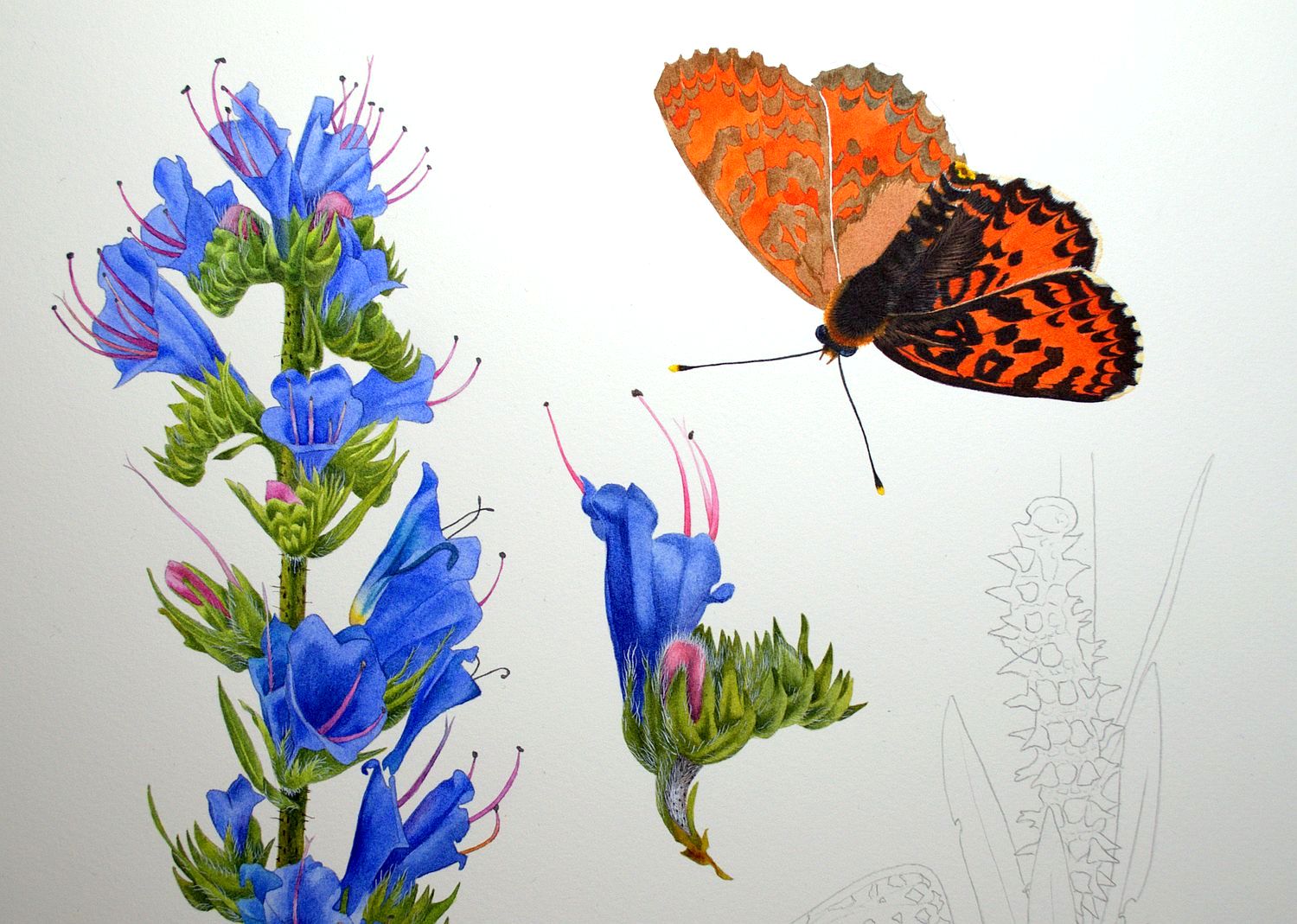 These are the stages of painting the butterfly:

Before I started painting the caterpillar, I did some color tests in the sketchbook. I was sure that I would use Translucent Orange PO71 because it fit here perfectly. However, I had to brighten it a bit, so I added Hansa Yellow Deep PY65. I would like to use my old New Gamboge PY153 here, but I don’t have it anymore, and unfortunately the new New Gamboge is not made of PY153 pigment.

Knowing which colors I would be using, I started painting the caterpillar from the lightest shades of orange and gray. The caterpillar was very time-consuming. All this beautiful black pattern had to be carefully painted with a very small brush. At this stage I realized that I can’t paint this whole caterpillar. Dozens of small black hairs/spikes grow on her body. If I painted them right away, I could smudge them later when painting the leaves. That’s why I had to paint the leaves first and then come back to painting the spikes on the caterpillar.

I also had to use gray here, but it was an easy decision, I used a mixture of Ultramarine Blue PB29 with Burnt Sienna PR101. These colors together give a very good universal gray. The caterpillar also had a different, very specific color that is difficult to name, something like very light brown, but grayish brown. I got it by mixing my gray with Naples Yellow Deep PBr24. And as a black I used my discovery, i.e. Perylene Green PBk31 + Pyrrol Crimson PR264. 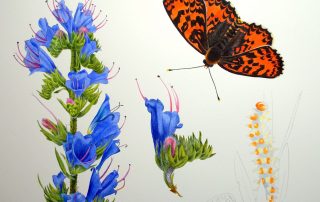 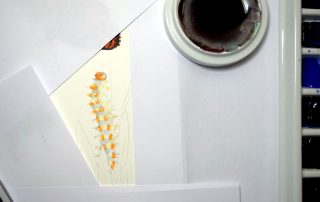 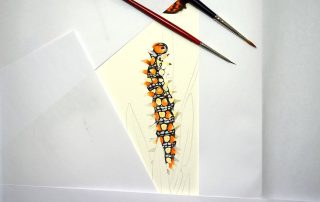 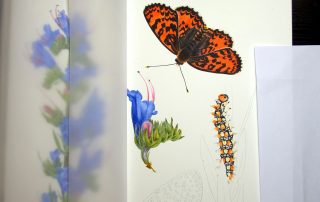 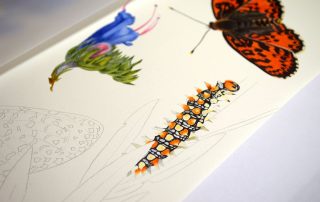 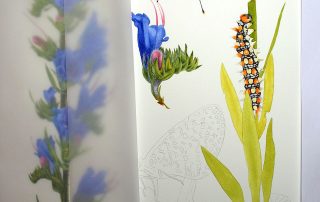 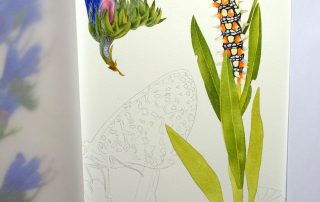 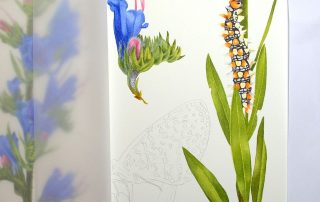 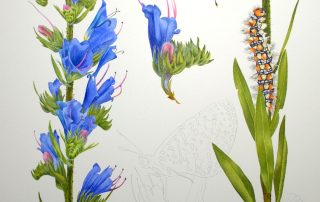 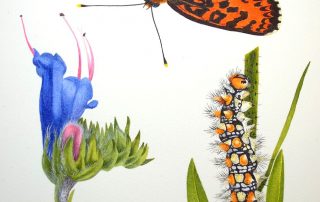 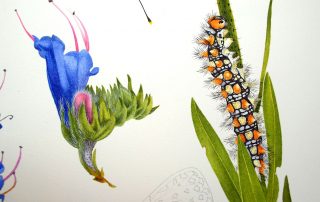 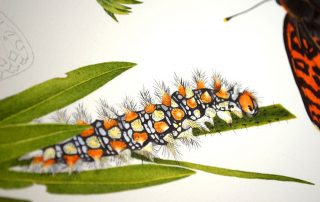 After painting the caterpillar, the time came for the chrysalis attached to the stem in the lower right corner. I used exactly the same colors I used to paint the caterpillar. This time I also added subtle reflections on the body of the chrysalis. I used white tempera with the addition of Indigo for reflections. 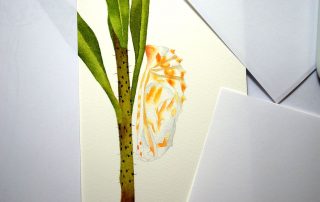 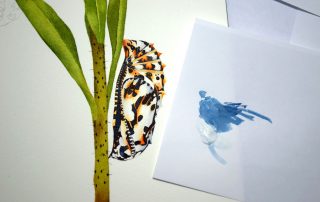 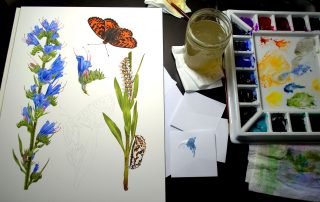 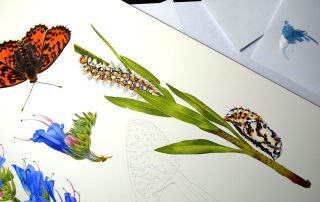 I left the last insect for the end. I started with a very light layer of Naples Yellow Deep PBr24 and added orange parts using Translucent Orange PO71 and Hansa Yellow Medium PY97. To paint the shadows I used a mix of Ultramarine Blue PB29 and Naples Yellow Deep PBr24. Before I applied a black layer of patterns on the wings, I painted the butterfly’s head and body. I also used white tempera to paint hairs. At the bottom I used a beautiful mixture of Winsor Blue Green Shade PB15 with Cobalt Turquoise Light PG50. Finally, using my black (Perylene Green PBk31 + Pyrrol Crimson PR264) I painted patterns on the wings. 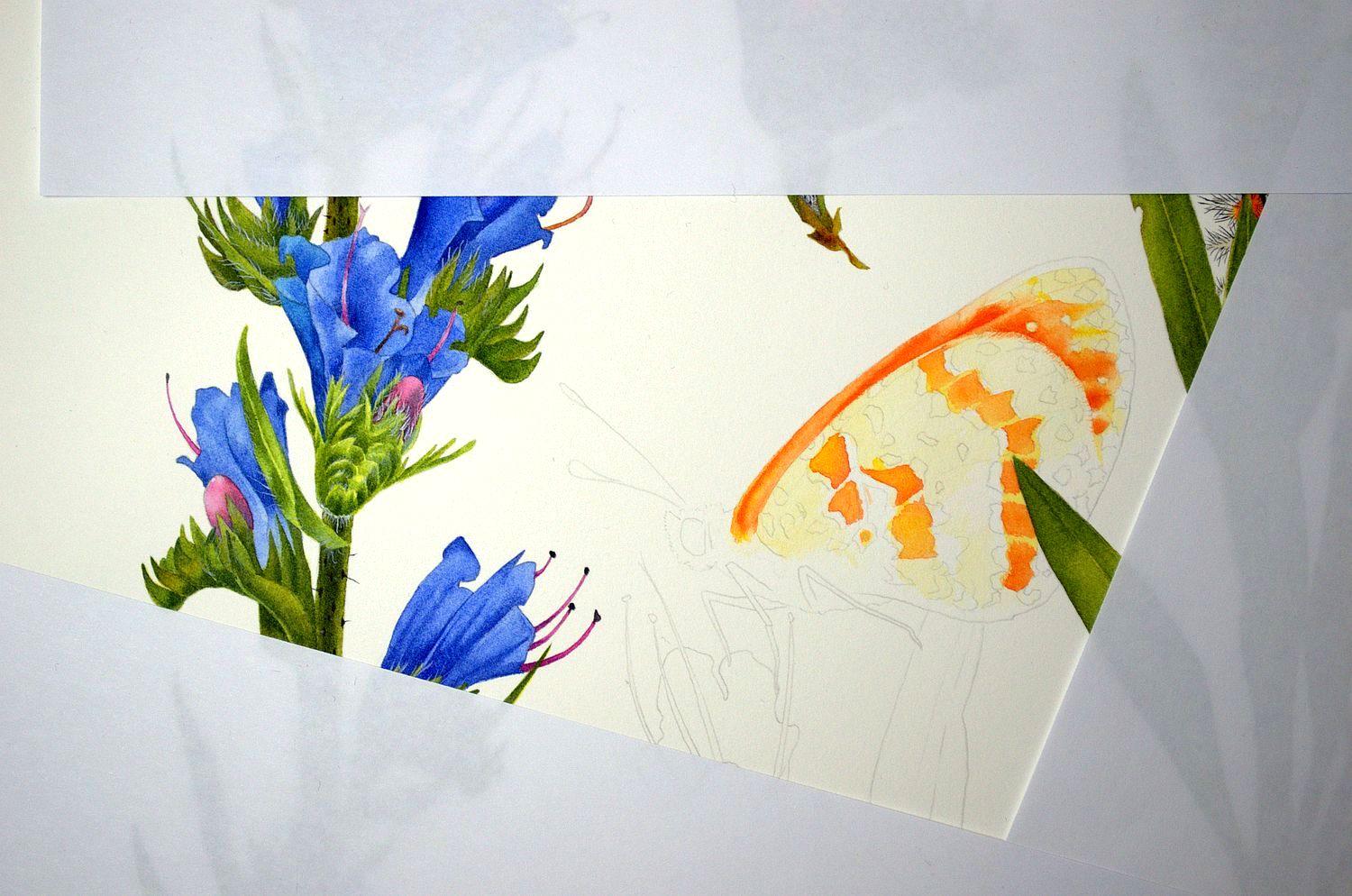 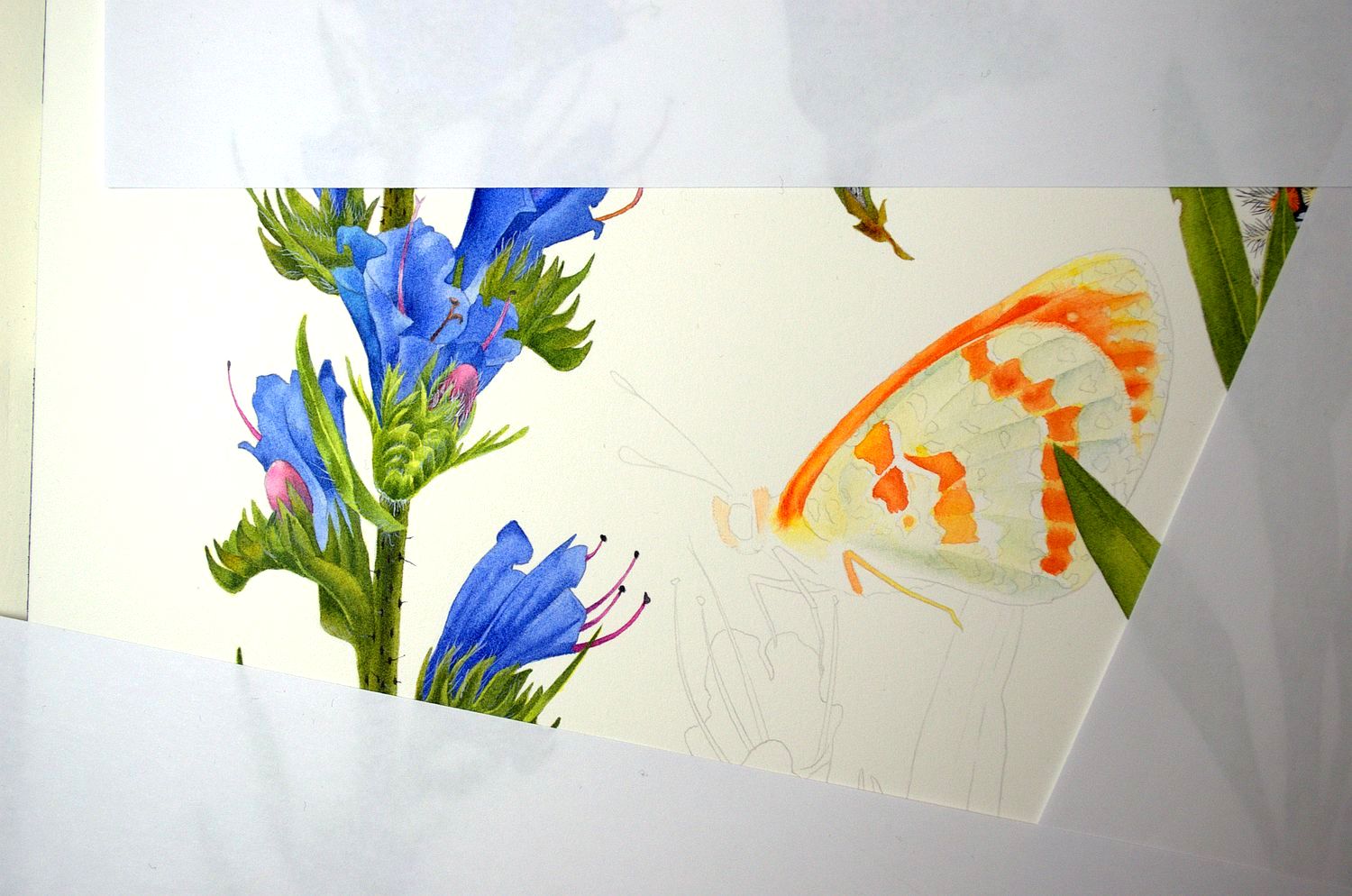 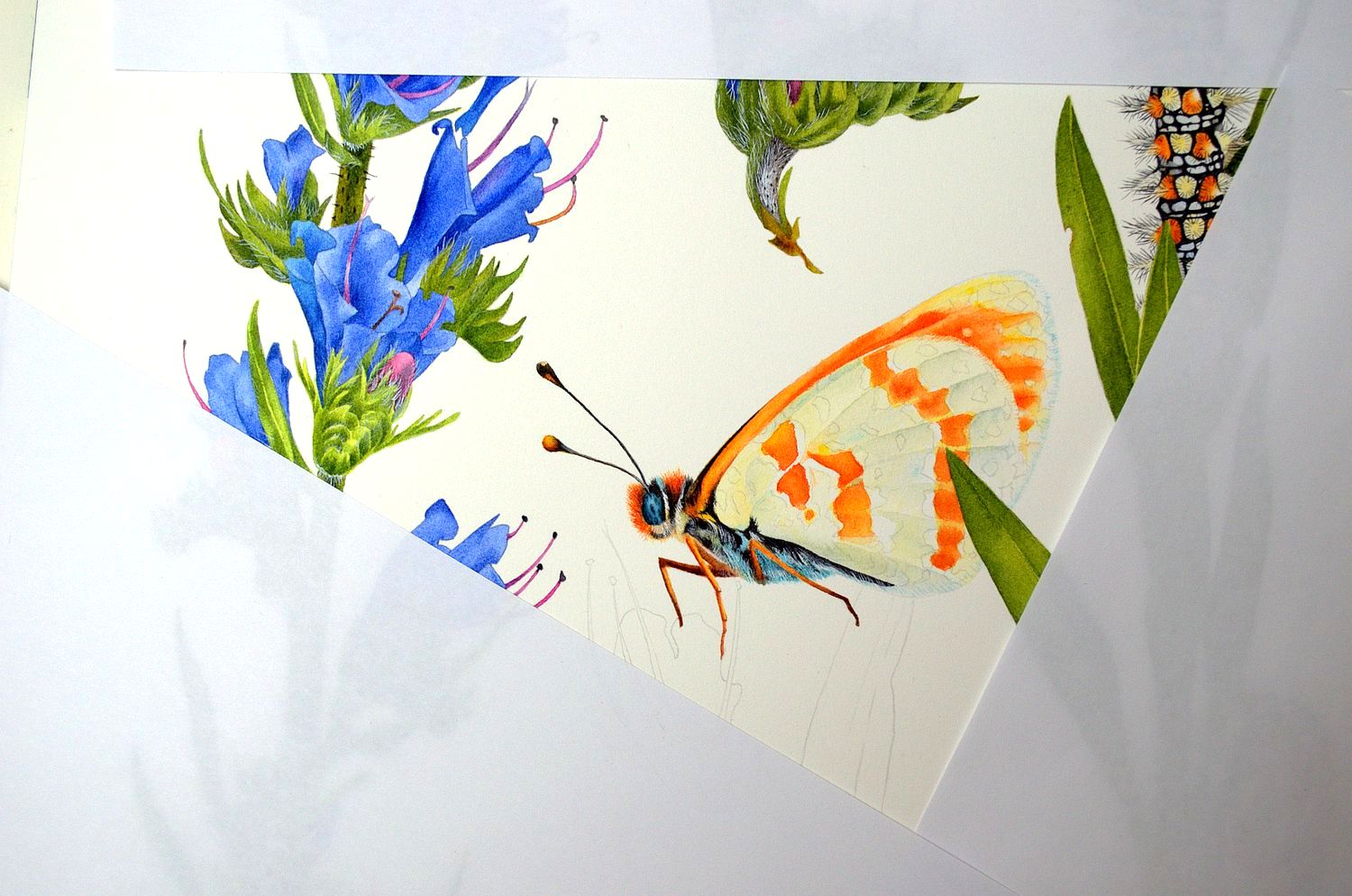 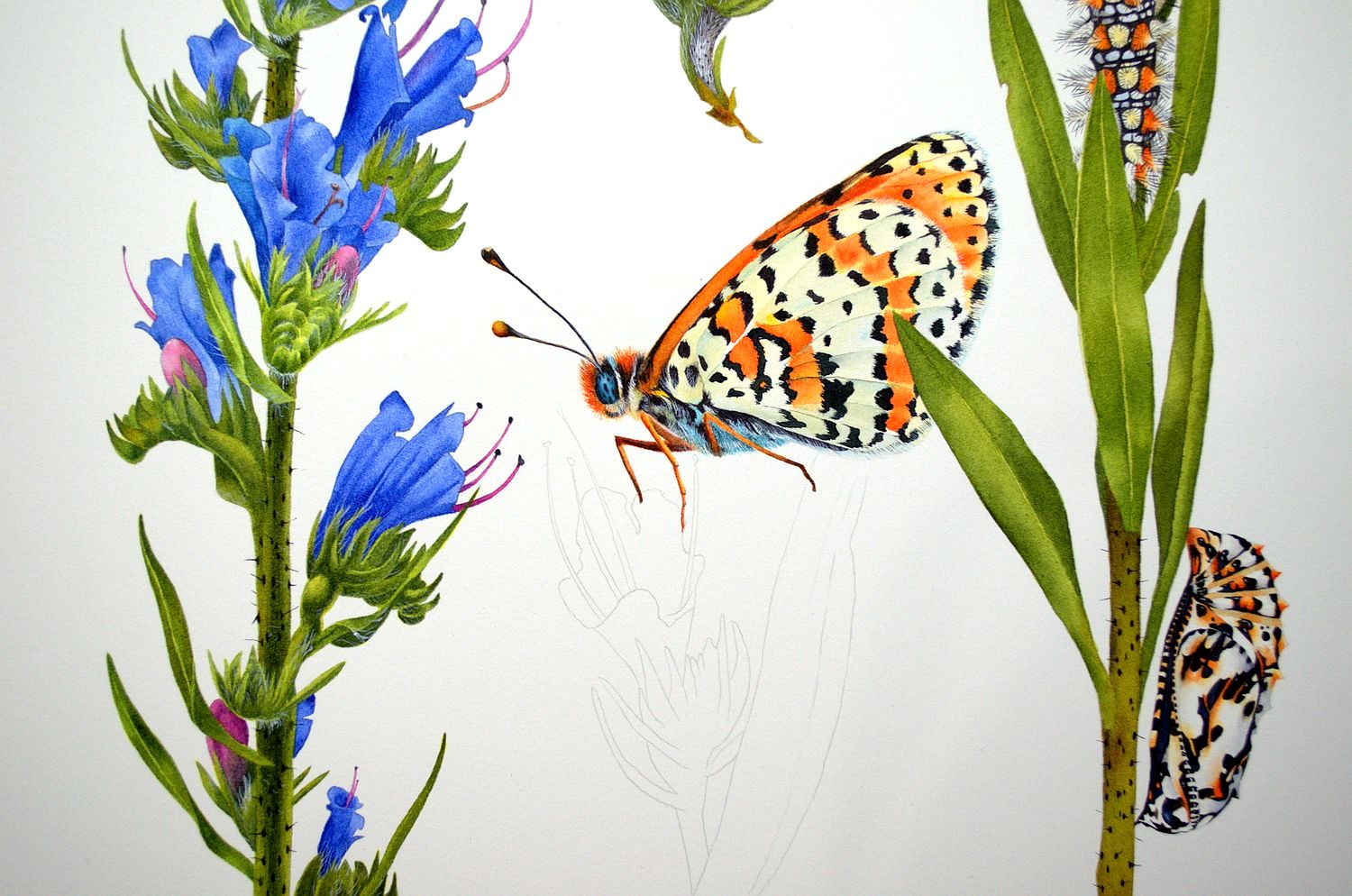 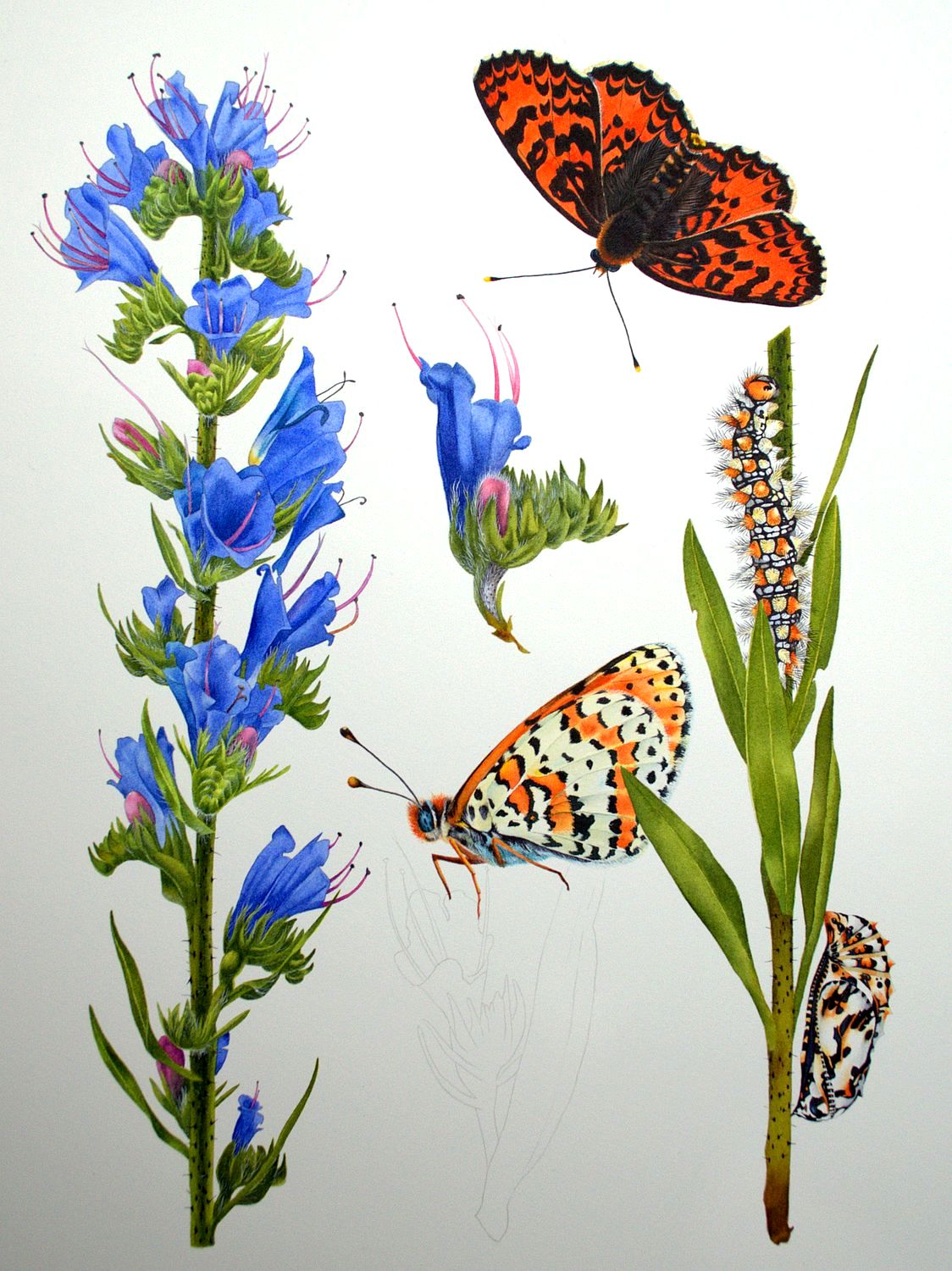 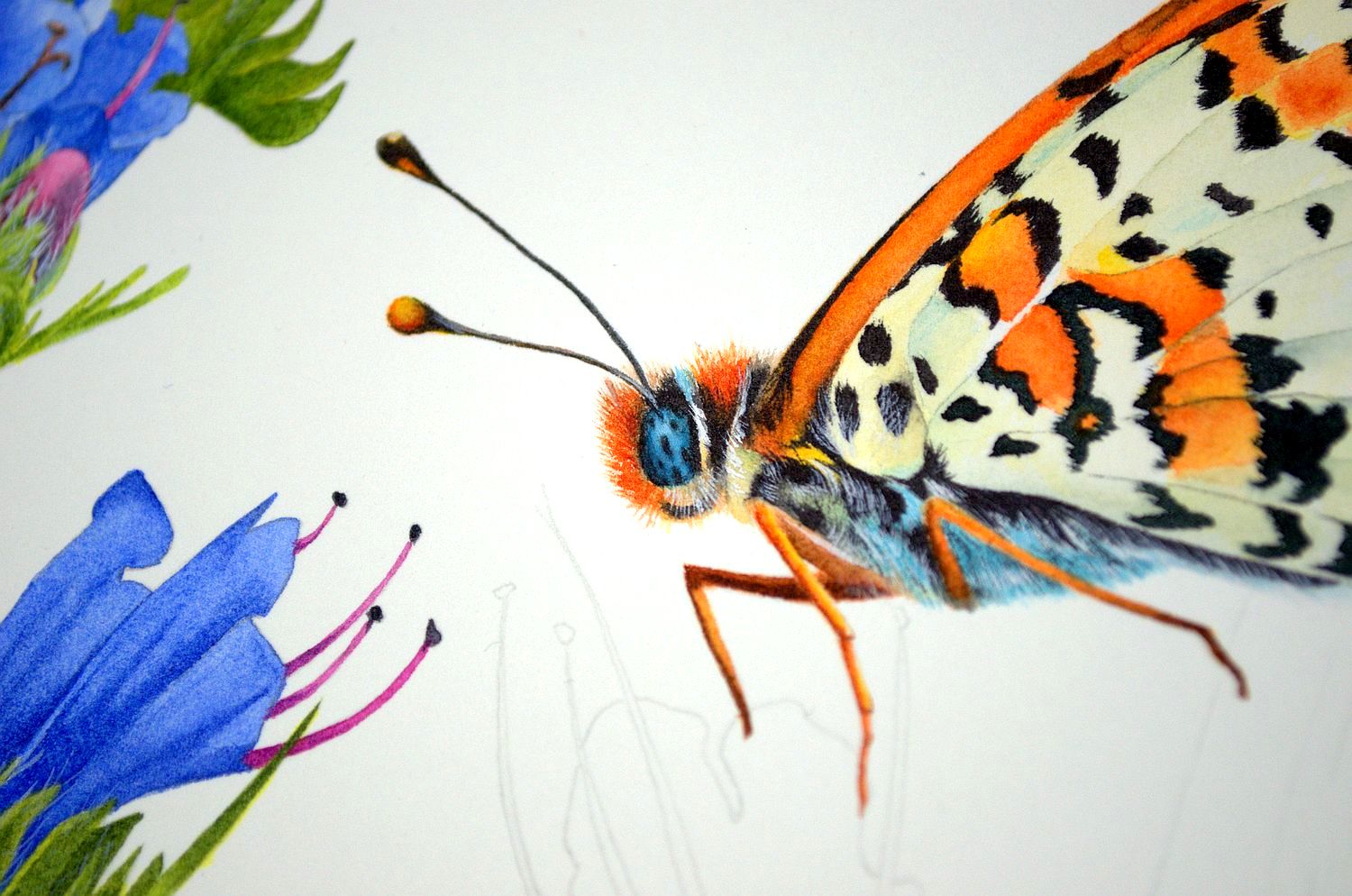